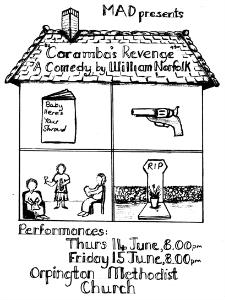 I had a very enjoyable evening watching the production of "Caramba's Revenge", at the Orpington Methodist Church last Friday 15th June.  The cast were excellent and perfectly suited to their characters. The play was very comical and I loved the twist at the end. Congratulations to Kathy Phillips and all the people involved instaging this wonderful production. I can't wait for the next one!!

This play took benefit fraud to extreme lengths! It started slowly but built in tension and excitement - expressed well by all the actors. Carolyn Licence and Pauline
Friend as Lottie and Marge coped with a very wordy script and Nic Parker as the tipple-loving Doris slurred her words very effectively! Dawn Knight playing the part
of Ronnie, met the challenge of delivering an Australian accent really well.

The play’s interest was enhanced in Act II by the arrival of the corrupt Augustus
Grubb (Jon Cox) and the overbearing shop-lifter Rose (Pat Woodison) and her
parrot. Liz Weller’s part of Grace was not a large one but was played with very believable wide-eyed wonder. The audience couldn’t second-guess who would be bumped off next but

Caramba got her revenge!  Well done MAD for another
enjoyable production.
Declan Barriskill  A great play, brilliantly performed, with intrigue, humour and so many twists
and turns a corkscrew would have got confused!  Chris Price

On Thursday June 14th at 7.45pm the public were settled in their seats ready to enjoy a mystery evening presented by MAD in the hall of the Methodist Church. Three very sweet ladies (Carolyn Licence, Nic Parker and Pauline Friend) discuss their house-keeping problems which seems to be a shortage of money and how to acquire some!  This was acted very well but went on too long.

After a refreshment break once again we returned to the play, which was now becoming a real mystery and full of madness and laughter. It seems a member of the household has been murdered; policeman, Augustus Grubb (played by Jon Cox) calls to investigate. A very charming Police Officer he was but he fell for a young Australian girl (Dawn Knight) who was staying in the house. The unscrupulous pair with their corrupt ways think they can solve everything –but there is a twist to the tale. Another lady moves in (Pat Woodison) and she has the upper hand, getting rid of all the others and inviting her friend (Liz Weller) to move in and continue the dodgy situation. Well acted and an enjoyable mystery. Well done.

It wasn't until 7.20 pm on Thursday 14 June that I finally decided to walk down to The Methodist Church to see if there was a spare ticket for Caramba's Revenge. Fortunately for me there was.  As we waited for the play to start the audience were treated to music such as Bang Bang You Shot me Down (very appropriate bearing in mind the content of the ensuing play), He Ain't Heavy he's my brother by The Hollies, Albatross by Fleetwood Mac and Hey Mr Tambourine Man. Music right up my street and I spent an enjoyable 10 minutes or so, foot tapping, singing along (not too loudly I hope) and enjoying a mini version of 'Name that tune'. The outline of the play was as follows:

"Set in the 1980s, four elderly ladies have been sharing their lives in Violet's rented house, pooling their pension books and sharing chores. After a mugging Violet dies, but, needing to hold on to her pension book (not to say the house rent book) Marge, Lottie and Doris omit to tell the authorities and leave Violet's body peacefully in a cemetery. Life goes on for the pensioners until the arrival of Violet's granddaughter, Ronnie, from Australia, with unexpected results."

William Norfolk's black comedy featured 8 scenes, all occurring in the dining room of Violet's rented house over the period of a couple of weeks.

There were large roles for the three leading ladies Lottie (Carolyn Licence), Doris (Nic Parker) and Marge (Pauline Friend) each with their individual characters which were well performed and believable.  I thought that Lottie, a Bohemian aspiring authoress, delivered an impressive, yet sinister character, Marge continued trying to provide meals for the pensioners despite the continuing shortage of cash (very topical) whilst Doris was trying to keep her on-going love affair with booze a secret (obviously not a devout Methodist)! I was impressed with Ronnie's (Dawn Knight) ability to maintain an Australian accent throughout and I did enjoy the timely off-stage sound effects.

During the dialogue on stage Doris divulges rather more than is circumspect to Ronnie and to Detective Inspector Grubb (Jon Cox) who arrives to investigate the disappearance of Violet. Owing to her association with alcohol and also spending  a disproportionate amount of the household budget than she should the other companions decide that Doris ‘has to go’!

With Doris’ demise another housemate is sought and this results in the arrival of Rose (Pat Woodison) with her caged bird.  Whilst the dialogue led me to believe that there would be another murder I did not anticipate that Rose (Pat Woodison) would do away with the three remaining residents along with the Police Officer investigating the initial disappearance and death of Violet.

Although this play starts after the initial death of Violet there were plenty of humorous lines, (such as ...in the departure lounge of life... ) and comic dialogue which was interspersed with 5 murders. I hope all who saw the play enjoyed its intriguing twists and turns as much as I did. The speed with which these murders occurred was very worrying and I only hope that there will be some remaining members of the congregation at OMC when I next attend a service!   Angela Whitley 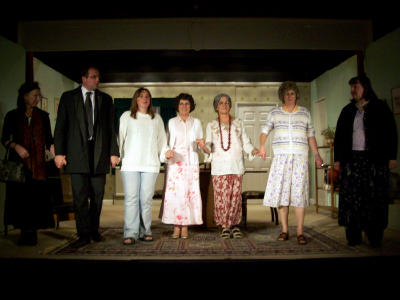