This building - affectionately known as the "Tin Tabernacle" - was the first Methodist Church in Orpington.  It was at the corner of Chislehurst Road and Goodmead Road (in the one-way system at the north end of Orpington High Street), and the site was later occupied by a furniture warehouse.

The second-hand corrugated iron building, purchased for £30, was formally opened on 23rd March 1909 and remained in use until the need for a larger building emerged.  This need was met by a new church building (now the church hall) built on the present site (purchased for £900) and opened on 16th November 1933.  The stone-laying ceremony for the present church ( "The New Church") took place on Saturday 25th October 1952, and the first service in the new building took place on Sunday 17th October 1953.

THE ROMANCE OF METHODISM IN ORPINGTON

As one privileged to play a small part in the building up of Methodism in Orpington, may I say to Mr. Fryer what Alice thought of saying to the uncommunicative Mock Turtle, “Thank you, Sir, for your interesting story”. You suggest, Mr. Editor, as did Alice, that there must be more to come. So be it.

Our present Place of Worship was opened on November 16th. 1933, and partially completed a scheme which had been seven years in the making, for it was in 1926 when the surviving ‘old originals’ and a handful of newcomers in a struggling cause first discerned the signs of the times and began to work for a more virile Methodism in Orpington. At that time our Society mustered about 30, and our weekly offerings averaged £1. It was only by constant ‘special efforts’ and by ruthless economies, tempered by the unstinted goodwill of our sister churches at Penge and Bromley Common, that our heads were kept above water. There was no resident Minister at Orpington, and the ‘status’ of our little ‘Bethel’ did not rank high in comparison with our more happily circumstanced neighbours.

With the projected electrification of the railway system from London to Orpington, and the opening up of the district generally for housing purposes, there came to our church a clear call for a ‘Forward’ movement which we seemed  powerless to answer, but it became so insistent that the Primitive Methodist Home  Missions Committee was approached. It was on September 8th. 1927, that a deputation met our Leaders and Trustees and heard our plea for help in putting Methodism on the map of the new town of Orpington. The deputation was suitably impressed. Meanwhile, stimulated by a gradual accession of new members, an appeal was made to our circuit for the Junior Minister to reside in Orpington, and by the generosity of our parent church at Penge (to whom the Junior Minister by right belonged, and through whose earlier sacrifices the financial stability of the Chislehurst Road cause had been sustained) this move was made, with far  reaching results.

Soon afterwards, Methodist Union was taking definite shape, and with the influx of new resident Methodists the prospect of a new church began to materialise. A scheme was first mooted in June, 1930, when the site on which the Commodore Cinema now stands came onto the market. We were offered half of this site for £2000, but were unable to entertain the offer. Later a site became available at the corner of Spur Road and Felstead Road. Negotiations were opened with a view to purchase, but eventually broke down through  causes outside our control. Eventually, through the good offices of one of our members, the present site was obtained for £900, the cost being defrayed by the three Methodist Connexions - Wesleyan, Primitive and United - in equal proportions. The first public intimation of the building of the Sevenoaks Road Church was made at a Sunday morning service at which the Chairman and members of the Urban District Council were present at the invitations of the Rev. Joseph T. Barkby, an ex-president of the Primitive Methodist Conference, who conducted the service and whose influence was largely responsible for the generous  measure of financial aid granted by the Primitive Methodist Connexion towards the building of the present church, and the church now to be built.

The Canaan of our new spiritual home was not reached without tribulation, for there were those who feared that with our exodus from the East of Orpington to the West, some of our aged members and adherents would seek ‘fresh woods and pastures new’ near at hand, and that others not steeped in the Methodist tradition would follow in their train. Others reasoned that the church and school should be maintained as a ‘Mission’ to fill the needs of the community in that ‘corner of the vineyard’. Such forebodings and reasons proved well-founded, for quite a number ‘ceased to meet’, but the remnant that formed the nucleus of the new dispensation were added to week by week, and at the first Leaders Meeting following the opening of the Church in November, 1933, a membership of 87 was recorded. A year later it had grown to 109 and, steadily increasing with varying fluctuations year by year during the war, the 200 mark was reached in 1945. Since then the roll has grown until it now musters 260 fully accredited members. Such an accession of membership was largely attributable to residential development and the immigration of Methodist families, but it was also due to pastoral spade work and to the influence and example of church members, and the work of the Sunday School and other church auxiliaries. One of the early steps in the building up of the life and fellowship of the church was the revival of the Methodist ‘Class Meeting’, which sought not only to   provide a ‘power station’ for the church, but to influence the ‘shape of things to come’ along the lines laid down by John Wesley.

The Class Meeting prospered until 1940 when, owing to evacuation, war service of various kinds, and the almost nightly incidence of air-raids, it was suspended for ‘the duration’, to be reconstituted in its present form of ‘Church Fellowship’. The Sunday School and other juvenile activities also suffered from similar causes, but were maintained in the face of many difficulties until, with the return of peaceful days, the work among the young has developed so rapidly that it has long since outgrown the accommodation available and is sorely handicapped in its endeavours to introduce modern methods for the training of the Church of the  future. Another marked step forward was taken in 1935 when the Young People’s Fellowship re-organised itself into a Methodist Guild, an activity which has amply sustained the high hopes cherished by its pioneers and set forth in its charter.

Another landmark in the life of our Church was December, 1943, when the Circuit granted a plea by the Orpington Society for the Superintendent Minister to reside in Orpington in order to give closer pastoral oversight to the building up of the cause and to the development of a definite scheme for the building of the new church. The need for a larger building had been evident before the war, and had peace prevailed that need would have been met long since. Permission to build was withheld until the debt of £1700 outstanding on the present premises was reduced to £1000. By various ways and means this debt was reduced to the stipulated minimum and in 1948 was finally liquidated. The many hindrances and frustration in the way of building generally, are familiar to most of us, but the hope is now strong within us that through the efforts of our Minister and the London Mission and Extension Committee, to whom our Church is so great a debtor, the church of our age-old dream will soon become a reality.

In this cavalcade of events there is no scarlet thread of romance, no glamorous interludes or heart stirring emotions. It would of course, be possible to incorporate in this recital of facts an aura of sacrificial devotion and service, of spending and being spent in the pure joy of doing the Master’s will. Some day the full story may be unfolded. It will not recall deeds of ‘daring-do’ but just humble adventuring for Jesus’ sake by the ‘some there be that have no memorial, but whose names are written in the Lamb’s Book of Life’ and who gave birth and nurture to Methodism in Orpington.

Editor’s Note:  Who will take up the challenge and write the next Chapter of ‘The Romance of Methodism in Orpington’? Much has happened since the present building was opened in October 1953.  If you know the next chapter in the story, please write it down and click here to e-mail the Editor of the Orpington Methodist Church magazine,  The Link.

The "New Church"
Reproduced below is a leaflet about the new church building dating from shortly after its opening in 1953.
(Thanks to Elizabeth Hulbert for the loan of this leaflet.) 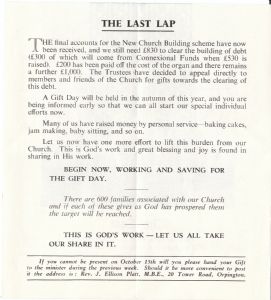 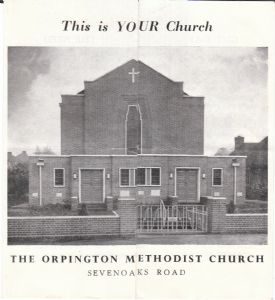 back to Welcome page