This production was originally scheduled for December 2010 but due to heavy snow and hazardous conditions
it was postponed to 6th, 7th and 8th January 2011.

I had not heard of ‘Just So’, the musical, until Carolyn Licence decided to direct a performance by  A quick search on the internet revealed that it was devised in 1984 by a dynamic duo, George Stiles (music) and Anthony Drewe (lyrics).  Stiles and Drewe have been working together since they met at Exeter University over 20 years ago.  They are most famous for the multi-award winning musical version of ‘Mary Poppins’.   ‘Just So’, the musical, is based on Rudyard Kipling’s stories of the same name published in 1902 to entertain children who ask ‘why’ a lot!  The 2005 production of the show was recorded with the Chichester Festival, cast including John Barrowman as the Eldest Magician and Anthony Drewe as the cooking stove.

It is a challenging musical with difficult (though witty) songs and lyrics, so full marks to Carolyn and the cast for taking it on.  The musical starts in an attic from which the Eldest Magician starts a tale of how various animals got their distinctive features – how the elephant got its trunk, the kangaroo got its legs, the zebra stripes, the leopard spots etc.

What of the MAD production?  I attended on Friday evening and on Saturday afternoon for the matinee.  I thoroughly enjoyed both as, from what I could see and hear, did my fellow attendees.  The productions had their not so good points.  Some of the singing was too quiet against the musical accompaniment and it was difficult to hear the lyrics, which was a pity.  There were some forgotten lines and missed cues.  However these are quibbles given the challenging nature of the musical and all the fine aspects of the performance.  At each of the two productions I watched, the audience was buzzing at the end.  Full marks to the three central characters that hold the musical together.  Firstly I must confess a family connection so I did canvass a wider opinion, but it is fair to say that Richard Claughton as the Elephant Child was a real star.  He sang clearly and melodically and was confident and assured.  Secondly Helen Lawrey as the Eldest Magician was a lynch pin to the production who showed similar confidence and assurance.  Thirdly Dawn Knight as the Kolokola Bird acted and sang beautifully, particularly with her solo piece ‘Wait a Bit’ which cannot have left a dry eye in the house.  Richard and Dawn were a great double act particularly as they paddled their boat from the stage to the exit on their magical journey.  There were some great cameos to add to the humour.  Chris Parker was hilarious as a loud and impolite Rhino with some very funny lines in his song ‘Thick Skin’.  There was able support from Debbie Price as the Parsee and Janet Haley wonderfully dressed up as a Stove.  Janet thought she would just be a little cooking pot and got quite a shock when presented with a costume more like an Aga! We laughed with Glenn Crane as the Leopard and Gus Challener as the Jaguar, particularly with their comic dance routines, and with Jan Luff as the Giraffe and Pauline Friend as the Zebra as girls out on the town.  Katie Parker played the Kangaroo and Rachel Chown the Dingo Dog with appropriate Australian twangs.  Don Benskin played a menacing crocodile.  There were herds of wildebeest, elephants and wallabies on stage played and sung with gusto by too many to mention.  The costumes were imaginative and striking. Congratulations to the musical side with Robert Gunn playing the keyboard throughout – learning all that music and playing with such intensity must have been exhausting!  Praise also to the percussion provided by Ben Wells.  As always with MAD productions the set, sound and lighting were first rate.  Last but not least, tribute must be paid to the great Director, Carolyn Licence, for putting on something different and challenging, for marshalling such a large cast and crew and bringing about an excellent show.  Full marks to her.  I for one look forward to the next musical production. 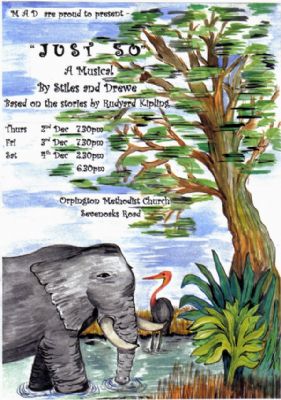 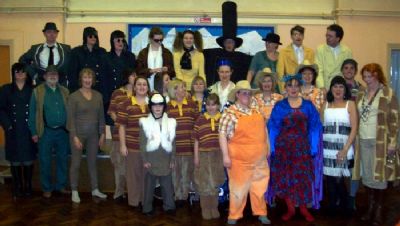