Out of Sight Out of Murder 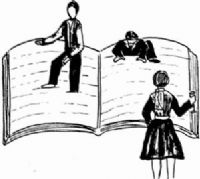 A Mystery Comedy
by Fred Carmichael
Directed by Kathy Phillips

THE PLOT is ingenious.  A mystery writer scratching his head at his typewriter in a drafty old Scottish house is struck by lightning in a fierce Highland storm and while he lies stunned the characters in his book come alive and create the perfect murder plot for him.

“I wish!” I can hear a multitude of writers cry as they scratch their heads and draw blood trying to think up a first line for a new book.   Stand by for global reports of writers rushing about in storms hoping to be struck by lightning.

It sounds a bit MAD and it is.  The comedy thriller ‘Out of Sight Out of Murder’ is the latest spell-binding production by the Methodist Amateur Dramatics group at Sevenoaks Road with nine of their thespians having a whale of a time weaving their way through the twists and turns.  Glenn Crane in the role of the author, Peter, gave a performance of sustained bewilderment as the fictional characters ran circles round him and he tried to make sense of their shenanigans.

They threw everything at him.  Creaking doors, rotting stairs in the basement, banshees howling on the moors, secret panels in the library and gallons of cyanide in the cocktails served,  of course, by a sinister butler called Cogburn.   This role was a gift for the rich talents of David Howkins who has trod these MAD boards with distinction for many years.

He cast his red herrings in every direction with threatening dread so that poor old Peter had so many suspects for his whodunit it seemed at times as if everybody did it.  Except the butler, of course, who kept on surviving while the victims fell to the unknown executioner.

Not that they had any complaints about making their untimely exits. Addie (Katie Parker), the gormless maid rushed out into the night to be killed by a large vase thrown from the roof.  The others delighted in telling Peter that they had been ‘knocked off’ by better authors than him in literary history.  They had over the decades appeared in the works of a galaxy of mystery writers from Agatha Christie to Edgar Alan Poe,

Lydia the traditional ‘Thirties flapper (elegantly played by Nicola Parker) dressed in white with a long cigarette holder looked as if she must have had many an interesting encounter with Hercule Poirot.   “I am going to get killed” she blithely announced.  “I always get killed”

The beautiful young ingénue, Kay, was played by Alice Phillips with the right mixture of youthful self-confidence and apprehension. The male lead, Dick, (played by Angus Challener) sealed his own fate when he was too eager to get to the love scene (“there’s always got to be a love scene”).  The unconscious author Peter promptly wrote him out of the play with an ‘accidental’ swig of cyanide.  Turned out that Peter was after Kay, himself.

We must expect startling twists in works of this nature, of course, but this, I think, was a twist too far which stretched the elastic to breaking point.   For a start it turned the author into a ‘baddie’.   Heaven forfend!   It also raised impenetrable legal questions.   Could a real author, one wonders, face criminal charges for murdering a fictional character in a love triangle?  There is another play there, surely.

The plot thickens in this play with the discovery of hidden documents which reveal a fortune left to Kay by a man who invented paper clips.  This leads to a lawyer (Chris Price) getting murdered.   By the end there was a mass Mexican stand-off by the surviving characters in which Cogburn the butler waved a gun and claimed he was doing it for all butlers in fiction to protect their reputation.   David Howkins declaimed like Lenin announcing the revolution.

The infectious idea spread to the others, Fiona (the grand dame, Jan Luff) a mature knitting fanatic not unlike Miss Marples, wanted a grandstand exit, too, to get herself into another book.  It was left to Caroline Licence as Minna the landlady of the house and the only real person to rescue Peter from his characters by restoring his senses with a cup of tea/glass of water.  The backstage crew did a great job in creating this splendid production.  James Murray 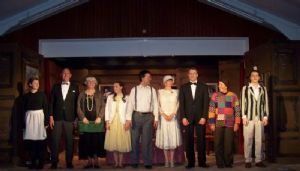