Performed by Methodist Amateur Dramatics on Friday and Saturday 24 & 25 June 2011 and reviewed by the M.A.D. Spy

All sleuths arrived and seated themselves to the wistful tunes of Doris Day, although many didn’t hear it over the buzz of excitement of the evening ahead!

Dinner soon arrived with great service from the waiters and waitresses who were extremely helpful and were running around like swans with trays in their hands (graceful on top, but paddling for England underneath!!)  Looking around the hall it was apparent that the seating had been arranged skilfully without a single table being silent; each being populated with like-minded people who made the atmosphere calm and friendly.  Roast chicken with trimmings AND gravy went down very well at my table and the vegetarian gave no grumble either.  I could just imagine Carolyne Cox going full tilt with finely tuned military precision in the kitchen and I must congratulate her and her crew for the work they put into both evenings.

The lights then dimmed and the BBC Home Service began to broadcast.  The set design and execution was wonderful.  The BBC radio microphones, the posters and even the “ON AIR” sign all set the scene wonderfully.  I so wanted to applaud when the radio announcer pronounced “La Frond du Liberaçionne de Naçionnale” so effortlessly, but I thought it might be an interruption if I did at that point.  So I didn’t.

The death and inheritance of Caroline Maltravers’ mother, the debt of her husband Richard, his pregnant mistress, the loyal servants who were unpaid for weeks, the Doctor dealing in morphine and Alice Maltravers’ hopeful fiancé still grieving for his mother – murdered with fake penicillin. All the characters had a reason to kill Richard... but Who Dunnit?  The delivery of this show was outstanding.

Those who stole the show:

Robert Gunn and Dawn Knight - the sound engineers - hilarious and quite often had me missing half the plot because they were so funny!  Chris Parker – the Doctor - who literally threw himself into his character bringing it to life; his attention to detail, when being questioned, was unsurpassable.  Chris had obviously done his homework.  Whilst Jon Cox had a marvellous character, his script was somewhat long-winded but he delivered very well indeed.  His legs must have felt like lead after so much standing!

The deliberation and questioning of suspects was exciting.  After reading the helpful hints on how to question people, I don’t think my table remembered to use any of them in our questioning… which was probably why we accused the wrong person!  Sadly, the ending was a little abrupt and whilst we were all keen to find out who the culprit was, it seemed very matter of fact and I think the audience would have enjoyed a little “Poirot-esque“ or “Miss Marple” kind of ending.  Perhaps a little less Richard Maltravers and a bit more in the reveal would have been better?

To sum up, it was such a refreshing change to the usual M.A.D format and I enjoyed it immensely, so much so that it actually made me think about joining the M.A.D cast.

I congratulate Debbie Price, the director, all the cast, crew and everyone behind the scenes who made this successful production possible.  (You’ll note I haven’t said who the murderer was.  Quite right too – you should have bought a ticket!) 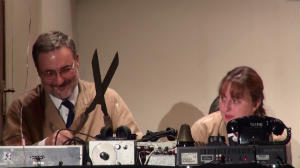 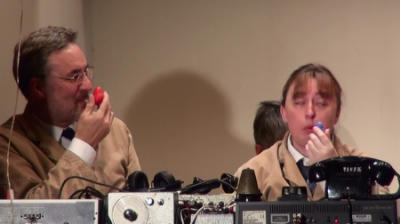 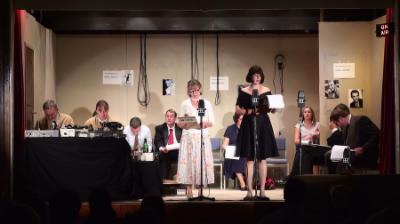 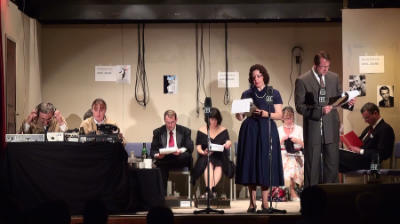