Voyage of the Dawn Treader

Prince Caspian and Narnia are in need of Edmund and Lucy's help once more.
Only this time they have to take their cousin Eustace with them!
They board the "Dawn Treader" and set off in search of the exiled Seven Lords of Narnia! 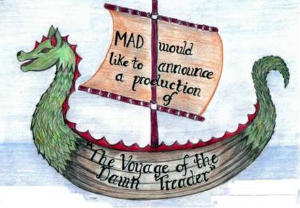 The Voyage of the Dawn Treader, performed by MAD on 9th, 10th and 11th February 2012, enjoyed by many and reviewed here by
Jan & Adrian Luff and David Gillman


Part of the ‘Chronicles of Narnia’ series, this story by C.S. Lewis follows on from the better known ‘The Lion, The Witch and the Wardrobe’ which has been produced as a TV play and more recently a widely acclaimed film, and ‘Prince Caspian’.

All stories relate to the mystical, magical world of Narnia and to fully appreciate ‘The Voyage of the Dawn Treader’ knowledge of the earlier story would possibly be helpful, if not essential.

That said, this production with a mostly young cast of thirty actors, was extremely well directed by the experienced Carolyn Licence and had much to commend it.  The prompt had little to do and as we have come to expect from the MAD backstage crew the lighting, sound, props and other behind the scenes activities were up to their usual very high standard.  However, in this case, particular mention must be made of the spectacular set design and costumes.  The performance took place in the church and the construction of the ‘Dawn Treader’ (a Narnian ship) which virtually filled the chancel of the church, must rank as one of the most outstanding sets for any MAD production.  It was breathtaking.  The costumes were many, varied and imaginative, and brought colour and added interest to the whole production.  The backstage team excelled themselves!

With such a large cast it is perhaps unfair to single out any particular performances but mention must be made of Angus Challener, Rachel Chown and Ashaleigh Hall who all played their parts with growing confidence.  Hopefully their talents will be used in future productions.  Supporting them were more mature cast members, too many to mention by name, who brought their previous acting experience to the stage.  Again, relative newcomer Chris Phillips, and Jon Cox who we have seen in previous MAD productions, grew into their parts as the story progressed.  Chris Price, as previously, played the enigmatical Aslan and it was with Aslan’s help that the three young people returned to their own world from their perilous adventures aboard the Dawn Treader.

Who or what is Aslan?  The triumph of good over evil!  Like all the Narnia stories ‘The Voyage of the Dawn Treader’ also contained an allegorical message and the audience was left to draw its own conclusion!

Well done Carolyn and the whole cast, including of course the bouncing Thumpers!  We look forward to the next MAD production.

We are familiar with searching through the wardrobe at home and finding ourselves somehow in Narnia!  Well it was true at church too – come through the doors between the concourse and church and the world was different!  As the curtains were pulled back we were invited to journey with Prince Caspian and friends ‘to the utter, utter east.’  This did not mean a trip down the M20 to Maidstone or Folkestone but an adventure on the ‘Dawn Treader’.  Normally it would be Noah’s Ark in church but not this time.  Travelling from island to island through fair weather and foul the search went on for the Lords and Edmund, Lucy and Eustace face the struggles and tensions of life all of which could distract them from the task in hand.

The cast enabled the story to be clearly told with humour. The set and costumes, lighting and sound gave the performance a depth which kept the audience attentive and entranced with the twists and turns of the journey.  WARNING!  Please don’t try to hop around with both feet in one sock at home, it is dangerous, but for professional Thumpers it was a piece of cake!

Thank you to all the cast, backstage and Director for a journey into the world of C.S. Lewis and for a production that brought important themes to light for a new audience. 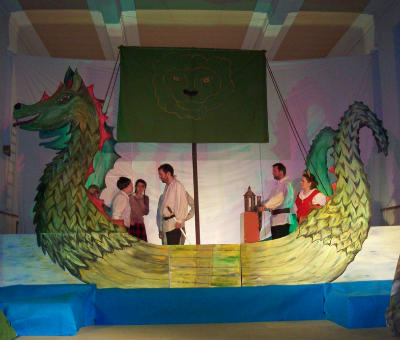 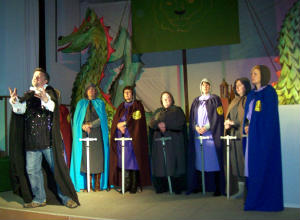 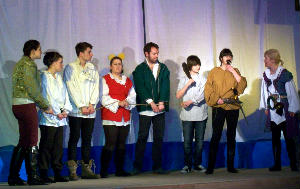 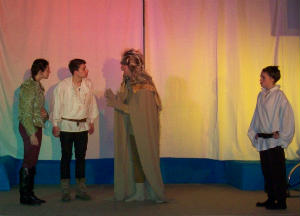 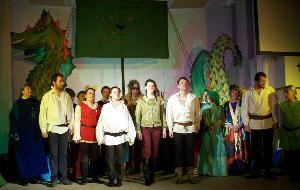