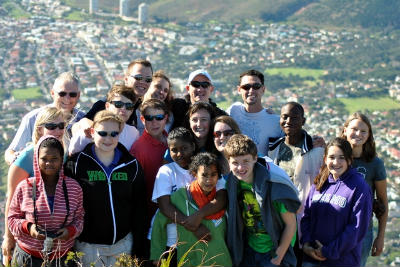 On behalf of the VYP group that went to Cape Town in August a BIG thank you to everyone at Orpington for supporting the project and enabling the contact to be established. The group of nine people left Gatwick on 18th August and travelled via Dubai to Cape Town arriving nineteen hours later. The in flight entertainment on Emirates helps to make the time go a little quicker!

Arriving at the airport we met up with Charlie and Richard and picked up the minibus for the last miles to Marsh Memorial Children’s Home. The group stayed in the gatehouse of the children’s home, a small property but large enough for us to sleep, eat and relax. After dropping our bags we were welcomed by the Director of the home and some of the young people who were going to share the fortnight with us. We played some games to help get to know each other – there was plenty of laughing and nothing too competitive!

Based at Marsh enabled us to share in the life of the home eating with the children who live in small groups with care workers in different houses. On one evening we cooked for them. There are still informal links with Action for Children (formerly the National Children’s Home) and Marsh reminded me of the sort of home that we had in the UK up until recently. Marsh provides care for children and young people where it is impossible for them to stay in their own homes, though work is done to strengthen the links within the family where that is possible. The conversations between our group and the young people of Marsh helped to put in context the challenges they face growing up. They shared in the visits we made in and around Cape Town and in the evening prayers we had in the gatehouse.

The work that we did involved the other Me 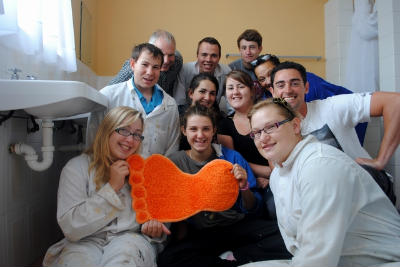 thodist home in Cape Town at Heatherdale. This is another children’s home that has two dormitories, male and female, for about sixty children. We were asked to clean and redecorate the toilets and bathrooms in the girl’s dormitory. So for seven days we were washing, scraping, sanding, filling, painting, repainting and sometimes repairing whatever we could in improving the appearance of the bathrooms and toilets. The group worked hard and well together. While we were working the children and young people from the homes were at school. Remember the season was winter almost approaching spring. The weather was not cold, good job since there is no heating it seems in many houses. No problem keeping warm while we were working! Our work was supervised by Sharon a volunteer from a project that helps fund and organise this type of work. Other groups will be coming later in the year to redecorate the girl’s bedrooms. They are in clear need of being refreshed – not only do parts of the home look tired, it appears more institutional and less of a home than Marsh.

The group attended church at Milnerton Methodist Church on the first Sunday. This is the church where Charlie attends and where we were joined by two young people, Terry and Cath when they were not at school. Their youth worker, Rory was also able to spend some time with us. The church fed us with a traditional ‘braai’ – a barbeque with meat sufficient not only for the day but the week! I was also able to preach at a township church at Worcester sixty miles north of Cape Town on the second Sunday. This was a very traditional service with a sung Te Deum and strong choir. The men were dressed in black and white, the women in red. Faith is a keystone in people’s lives and this was particularly evident at the communion service in which I shared.

The group were able to visit the National Park at the Cape of Good Hope where baboons, ostrich and whales were seen. They climbed the Lion’s Head and Table Mountain – at different speeds. I told myself it was not a race! That’s my excuse. The views were stunning. We were very fortunate with the weather. We had time in Cape Town and were able to visit both the Museum of Slavery and the District 6 Museum. Both visits helped to put the history of South Africa into some perspective and along with our daily prayers challenged our thinking about what it means to live together in a community where the human rights of everyone are valued. The trip to Robben Island was particularly poignant. Nelson Mandela spent eighteen years of his imprisonment here along with other political prisoners. An ex-prisoner led our tour of the prison and spoke powerfully not only of the past but how things are changing and how the focus needs to be for the future and a real working out of what reconciliation might mean. The lessons of South Africa have much wider application and will stay with us as we continue to reflect on the experience.

There are opportunities through the various house groups to listen to VYP reflections and see some slides. What we have experienced and learnt is something to be shared, the story of the people we met and the wider story of South Africa helps us not only to live on a big map, which is a good thing in itself, but has within it the clues to how the forces of goodness are stronger than everything that threaten to destroy it.

The words of Desmond Tutu: 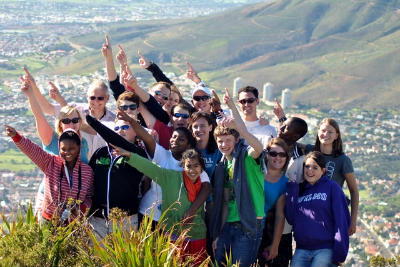 The VYP team flew out on the 18th August and after 18 hours of travelling, we arrived in Cape Town ready to work hard and make a difference.

Of all the amazing experiences I had and all the brilliant people I met in South Africa I will talk about my top 3 most life changing and awe inspiring moments for you to read.

One of the most amazing experiences personally was the view from the top of Table Mountain; the view was absolutely implausible!  Being able to see the whole of Cape Town, the mountain ranges in the distance, Camps Bay and the most south westerly point in Africa was just breathtaking.

Another experience that I will never forget is the day we went to Robben Island.  We were given a tour of the island by the very African sounding Wendy, and a tour of the actual prison by a man who used to be a prisoner on the island at the same time as Nelson Mandela.  He was charged for an act of terrorism and given a very large sentence for it. During the tour of the prison we were able to stan 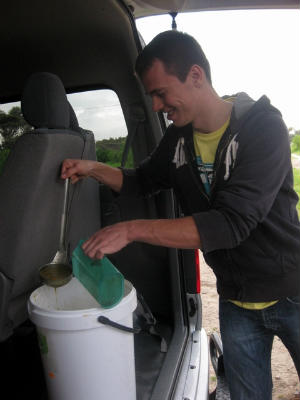 d outside Nelson Mandela’s 3x2metre cell, in which he spent 17 years of his life.

However, personally, the most awe inspiring and life changing experience was the soup kitchen we ran with the Local Minister Eddie.  Eddie runs soup kitchens through the church funds and collections given from the congregation on a regular basis and should be applauded for his amazing work and care for others in his community.  The soup kitchen we helped at was situated in a local, small township which was set back from the main road. We helped by handing out pieces of bread and filling up their own containers with delicious soup.  This moment was very powerful to me, seeing the looks of gratefulness and gratitude in their eyes as they received the soup was staggering and humbling.  It was this moment that made me feel like I was really making a difference, no matter how big or small it may have been; for me this was the most amazing experience of the whole trip and of my whole life in fact.  This feeling is indescribable, so to experience it for yourself, get out there if you can and do your part!

On behalf of the VYP team for 2011 we are so grateful for all the donations and commitment to the fundraising we got from the church and from everyone outside the church as well, and thank you for all the help and support we had from home and in South Africa from Charlie Claughton and a special thank you to Marsh Memorial Children’s Home who let us stay in their gate house and helped us to make this trip such a success.

Back to VYP home page