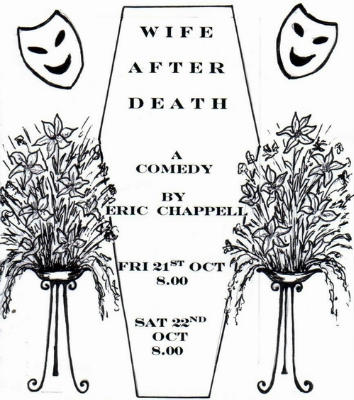 Wife After Death
A Comedy by Eric Chappell
When friends gather to pay respects to their deceased colleague,
they discovered that there was more to him than they thought.....

"Love and laughter” was Dave’s philosophy and there was plenty of both on Saturday night at the latest MAD performance.  Dave, “comedian and national treasure”, has died leaving his family and friends to pay their respects first at his funeral and later at the scattering of his ashes, quite literally as it turns out.  This might sound a sombre premise for a comedy but the audience were treated to an evening of laughter with a witty script full of great jokes and innuendoes. As the plot unfolds we learn that Dave had also spread his love around more liberally than supposed! The characters and relationships gradually unravel as more revelations are exposed and by the final curtain we realise that they didn’t know Dave, or each other, as well as they thought.

The MAD production was superbly directed by Kathy Phillips, in spite of some difficult challenges along the way. The cast looked right - married couples were believable and we soon learn that Dave favoured slim blondes when choosing a wife, even if he had traded one in for a younger model! Kathy’s able direction ensured the focus always being on the right people, even when all on stage together, and her attention to detail meant there was even an unseen “Dave” in the coffin, manufactured by the props department!

The two central characters, Harvey and Vi, were strongly played by Chris Parker and Debbie Price who made an impressive team. Their characterisations were very entertaining and Chris delivered some great jokes with his usual expert timing. Debbie, often on the receiving end of said jokes, demonstrated some equally funny facial expressions – the scene where she and Dawn were sweeping up Dave’s ashes left me helpless!

Alice Phillips appeared to relish her role as Laura, Dave’s grieving widow who is clearly “acting her part”. I personally have enjoyed seeing Alice grow with each production, finding more depth to each role (even when the character is so shallow!). Chris Phillips was co-opted to take part when another cast member had to withdraw a few weeks into rehearsals – it’s nice to see MAD continuing the tradition of family involvement. As Kevin, Dave’s agent, Chris’s portrayal was beautifully understated providing a great contrast to Harvey’s bold brashness. It’s hard to believe that Chris Phillips has not acted before as he looked a natural – well done Chris!

Dawn Knight seems to metamorphosis each time she takes to the stage as she has undertaken an amazing array of roles!  As Kevin’s wife Jane I think this was the hardest character to pinpoint in a cast of larger than life people. On her first entrance Dawn did well to completely change the tempo and atmosphere of the scene and she also expressed a range of emotions in the part.  The final character Kay, who we learn to be Dave’s first (and only) wife, was neatly played by Pauline Friend displaying a great pair of legs beneath her short skirt! Another accomplished actress Pauline also showed her expertise in delivering the killer joke. The argument scene between Kay and Laura was handled well with good timing by both Pauline and Alice.

As always the onstage cast were ably supported by a talented and efficient backstage team. The striking wallpaper was effective, the garden mural colourful and the outdoor crowd sound effect realistic and consistently timed with the door opening. The props department did well to ensure a never ending supply of drinks on the sideboard for the obviously thirsty cast!

My only criticism, apart from the prompt possibly having more to do than usual (although understandable with such a wordy script), would be the occasional dip in audibility.  Some lines were lost in the audience laughter and I know some audience members near to me struggled to hear on occasions when words were delivered too quietly or too speedily. Putting those points to one side, though, the script was achingly funny, the cast superb and the production slick and we were thoroughly entertained. Well done MAD.

My last mention goes to Dave – his presence was ever present (either in the coffin or golf trophy) and he was brought to life so fully in the course of the play that he almost felt like one of the cast!  RIP.

I shall never think of a 'mixed grill' in quite the same way again! Ruth
The MAD Props team have always shown great ingenuity (think of the boat in Just So) but they excelled themselves with the coffin - whose was it?  Declan 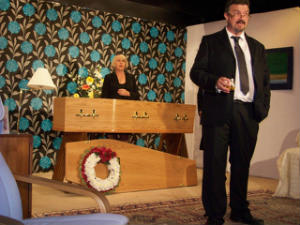 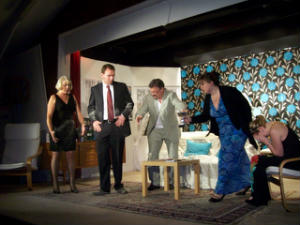 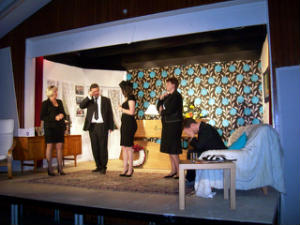 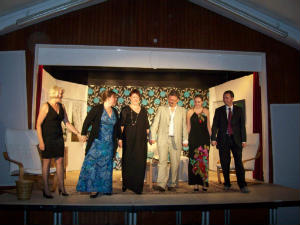 The coffin was kindly donated by
The Co-operative Funeralcare Services Ltd.